Single Page App built from the ground up, with back-end API and React front-end.

This app is currently in active use by Raleigh Moravian Church!

My church had been using a Google Docs spreadsheet to solicit and manage signups for each Sunday’s volunteers, but there were several pain points from both the administrative end, and on the part of the volunteers who used the page to sign up:

I developed an online signup sheet app that attempted to reduce friction involved in signing up for slots, and for administering the site: 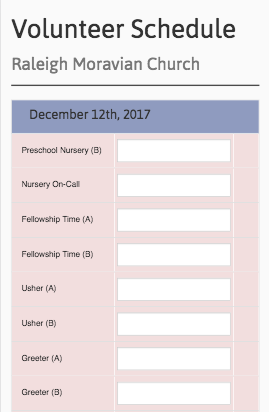 I went through a performance-improvement cycle after the codebase had stabilized somewhat. The production bundle had grown to 1.2 MB, with load times of up to 8 seconds in my tests. By profiling the package sizes, trimming a few unnecessary modules with Webpack’s IgnorePlugin and DedupePlugin, adding server-level compression, and using code-splitting, I was able to reduce that down to 168kb (!). In post-diet tests, total load times for the main page were under one second with cache, and around 1.5 seconds without.

Built with Webpack and Babel