I’ve had ups and downs the last couple of days, with this project. On Thursday night, Stephanie found ourselves both needing the car. She had a church meeting to attend, and I had tickets to the Durham Bulls game for Miles and myself. I considered taking the bus to the game (Durham’s main bus terminal is literally right next to the Durham Bulls parking deck), but eventually we came up with a better plan. I’d take the car, we’d drop her off at church, and she’d get a ride home. Everything went smoothly until I got a call a while later, while sitting at the game. “I’m locked out of our house,” Stephanie coolly informed me. So today’s lesson is: make sure everyone has their keys, even if they are not driving!

This little hiccup was more than made up for today, however. The wife and I were cleaning house this morning, and we eventually started talking about what to have for lunch. “Let’s ride our bikes down to the corner deli,” I said. We had the car out front, of course, so driving somewhere for lunch would have been completely within the rules of the experiment. But I have enjoyed my neighborhood rides, and I wanted to share that enjoyment with Stephanie too. So we hopped on our bikes, and had a leisurely ride together in the sun. We brought home an egg salad sandwich, a reuben, a brownie to share, and two cold bottles of ginger ale. It was quite civilized. Somehow, our ride to and from the deli made my sandwich and soda seem to taste a little better. 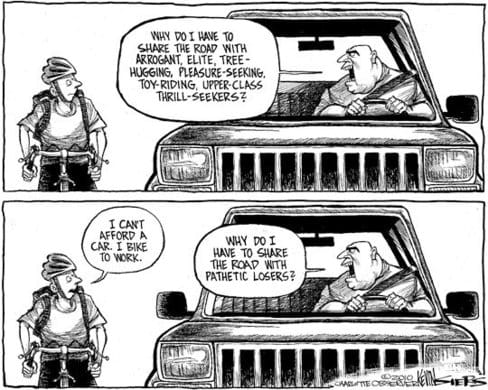 The Observer's Kevin Siers weighs in on a local controversy

While visiting my parents this weekend, my mom noticed I was reading a book on cycling. “There’s a big battle going on here between cyclists and drivers,” she said. And with that, I had something to write about today.

Although my mom didn’t elaborate, a little googling dug up the dirt. Several news articles, letters to the editor, blog posts, and editorials have appeared in Charlotte-area media in the past few months, all taking one position or another on whether bicyclists and motorists should have to share the road. The ignition point, apparently, occurred on July 13, 2010, when Charlotte’s weekly paper published an article that quite viciously attacked the local cycling community (and cyclists in general, really). Tara Servatius, the article’s author, begins by presenting a statistic:

You are 12 times more likely to die bicycling to work than you are if you ride in a car, according to a study by professors at Rutgers University and the European Commission. Other studies put the likelihood of death at 10 times higher per kilometer traveled on a bike.

Using that as the jumping-off point, Servatius compares bike commuting to smoking and putting a baby to sleep on his or her stomach. Her conclusion: that bicycling on the road is an epidemic. That it should be outlawed. That lives would surely be saved if we ridded ourselves of what she calls a self-appointed “protected class.”

It is a provocative statistic, and a provocative conclusion. If it is true, it would certainly be a heavy burden to bear for someone like myself. How could someone with a wife and child at home willingly choose to take great risks to life and limb, just to save some money and perhaps feel a little more fulfilled?

But is it even a valid point?

With a bit of digging, I found a study that may be the source for Servatius’s rage. Making Walking and Bicycling Safer, by John Pucher and Lewis Dijkstra, published in 2000, indeed claims that bicycling fatalities are 11 times higher than car occupant fatalities. Per kilometer.

And there’s catch #1. Per kilometer. So if I rode my bike 12,000 miles this year, instead of driving 12,000 miles, I’d have an 11 times higher statistical risk of dying in an accident, according to the report. Except that that would never happen. I expect that I may possibly ride up to 200 miles on a bike, on a really good month, if I decided to bike commute almost full time.

What if we looked at fatalities per trip, instead of per kilometer travelled? All of a sudden, the statistics start to look a lot different: bicyclists incur 26 fatalities per 100 million trips, compared to 9 for drivers, and 29 for pedestrians. (does that mean we should stop walking, too?). Instead of 11 times more dangerous, we’re talking about something closer to three times more dangerous. Catch #2.

Then there’s the data showing positive trends in cycling safety. According to the National Highway Traffic Safety Administration’s recent report, 716 cyclists were killed in traffic accidents in 2008. In 1998, the number was 760. More cars on the road in the last 10 years, but fewer cyclist fatalities. Catch #3.

Thirteen percent of the 2008 fatalities involved children under 16. Twenty-eight percent of the cyclists killed had a blood alcohol concentration of .01 or higher. Catch, catch.

And even if we accept the level of risk, what about Servatius’s leap in logic-that we should therefore not cycle? Isn’t the increased risk of death offset at some level by the decreased risk of heart disease, diabetes, obesity, etc etc? And isn’t there some risk to every human activity? More catches.

In the end, there are too many leaps in logic to count. One thing is for sure, though: Servatius’s data is misleading. At best.

I’m not going to try to exhaustively dissect the data out there, to determine the actual increase in risk that safe cycling imposes. Because others have already done it for me. Notably, Ken Kifer has written an excellent article on the bicycling safety statistics. Rather than rehash his analysis (with which I agree), I’ll provide a Cliff Notes version:

(In the introduction to a 1976 study, Bicycle Accidents and Usage Among Young Adults, authors Stuart A. Schupack and Gerald J. Driessen of the National Safety Council summed up the data problem thusly: “The primary obstacle to be overcome in examining adult bicycling is the gathering of a suitable sample from which to collect reliable data. Neither bicycles nor bicycle drivers are licensed by official agencies. Most bicycle accidents are not entered in any regular, official reporting system except for the few injury-related motor-vehicle involvements. Traffic rules are poorly enforced for bicycle drivers and violations are rarely, if ever, entered on official records. Fuel consumption figures used to estimate automobile mileage are, of course, meaningless for bicyclists. Thus, several of the important sources of information concerning automobile usage and accidents are not available when studying bicycles.”)

My conclusion? Bike commuting is safe enough. I’m not going to worry any more that I’m being irresponsible by choosing to bike. I’ll be safe, and obey all traffic laws. But I’m not going to set an example that one should “tiptoe through life, only to arrive safely at the grave.” You do what you can, and the rest is up to the fates.

Take care, and see you on the road.

Resource of the Day

The Pedestrian and Bicycle Information Center, at bicyclinginfo.org, has loads of information on bicycling and walking solutions in communities. In particular, you may want to browse The National Bicycling and Walking Study: 15-Year Status Report, for information on trends in accidents, usage, and advocacy efforts.