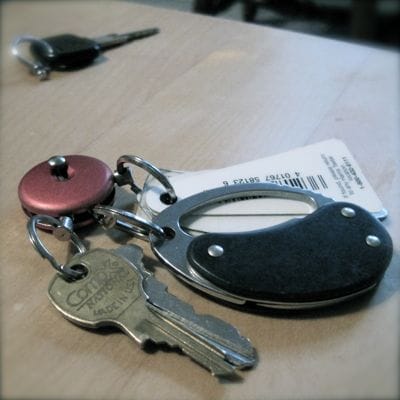 My keychain is a little lighter these days.

It’s been a rough few weeks as a two-car family. Our gas costs lately are through the roof. My Subaru has so many mechanical problems that it turns heads, and not in a good way. My wife’s Volvo wagon has entertained us with compounding issues that would make for great tragicomic theater. And with the promise of insurance, inspection, repair, registration, and tax bills in the next few weeks, it’s not getting any more fun.

I’m not sure exactly when I got the idea to rid myself of the Subaru. It was somewhere between going to the auto parts store for the third time in a week, and confronting parents who had offered to pay for some gas, but hadn’t offered to pay “for that much.” But the idea did come. And rather than treat the thought as a desperate joke, like I usually do, I let it linger a bit.

“Driving less” was a vague goal of mine when we moved back to Raleigh. We certainly picked a great location for it. Within a mile of our house is a greenway, a lakeside park with excellent amenities (and recently rated the best place to jog in the Raleigh-Durham-Chapel-Hill area!), a library, several restaurants, a post office, and a grocery store. Several bus routes pass within a hundred yards of our doorstep. It would be hard to pick a better spot to avoid getting behind the wheel.

I thought through the practicalities. Anything farther than a mile away, and I could bike it. Farther than five miles away, and I could take the bus. Best of all, most of our buses have bike racks, which extends a carless person’s area of mobility exponentially. I looked at how others had done it, such as in Slate’s Bicycle Diaries or in the Environmental Defense Fund’s Profile of Five Bike Commuters. (I also looked at how I didn’t want to do it. Certain flavors of snobbery may, perhaps subconsciously, have kept me from taking bicycle commuting seriously in the past. See, e.g., eco snobbery, cycle snobbery, hipster irony.) The pieces fit together easily and with little effort.

So I came up with a little experiment I’m calling Project Park (as in, the P in PRND21 … get it?), to explore the idea of our halving the number of cars in the lot. To see what happens when I trade one set of problems for another. The Project will initially last one month (long enough to get some of the kinks out of the system, hopefully, but not so long that I give up before forming any conclusions). The rules are simple:

At the end of one month, I will stop and assess things before deciding whether to go further. I considered keeping track of gas savings, travel time differences, and other metrics, but that seemed like a limited, misleading way to judge success. There are too many factors to consider, and not all of them are quantifiable. I’m interested in not just dollars and minutes, but mushier stuff too: what have we done to benefit our community, if anything? How do I feel about the long-term health effects? Will I be prepared for getting around in the middle of winter? Rather than look to some sort of “bottom line,” the experiment’s continued survival will be determined by the answer to one wholly subjective question:

Could we be better off with just one car?

The experiment has begun. My car is parked outside, with little more than fumes in the tank. I’ve cleaned and tuned up my bicycle, and stuffed a backpack with essentials. My pocket holds a wad of one-dollar bills for bus fare. I’ve steeled myself for whatever may come.

I still have so many questions. Is it safe to ride around town on a bicycle? What will I do if it rains? Or if it’s 100 degrees outside? What if I miss my bus? How much extra time will I be wasting on travel? Will that time be a waste, or are there some benefits? Or will I be saving time, by planning more, traveling efficiently, and avoiding congested roads? How much car exhaust will I be sucking in? The list goes on, and I’m sure I’m overlooking more than I’m considering. But I decided that the best way to find answers is just to jump in and learn as I go.

Along the way, I will posting updates on my progress, lessons learned, observations and research on bike-based mobility, and whatever else seems relevant. While the aim of Project Park is to find out, in a relatively unscientific fashion, if my family can find satisfaction with only one car, the aim of this series of posts is broader. I’m hoping that, by sharing my experiences in the next 30 days, I can inspire and assist others who have thought about doing something similar (especially those in the Raleigh area). As I will discuss in much more detail later, I believe that our current auto-centric culture is unsustainable in the long term. I believe that something will have to give, some day. I’m hopeful that this experiment will help me better test and comprehend those beliefs, and I’m hopeful that my dispatches will help at least one other person give it some thought too.

Take care, and see you on the road.